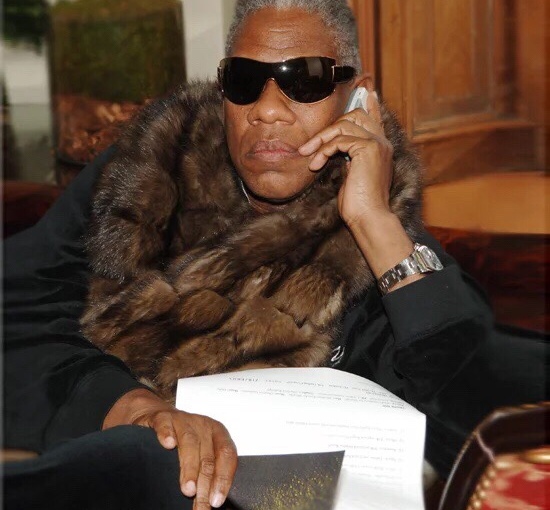 A special thank you to the man with the eye. Among a few others in the industry he is one who is truly inspiring.

A true man of culture and style personified. He is someone that struck up great fuss and is always a point of conversation in the room. As the premier Editor at Large Andre Leon Talley (A.L.T) earned his introduction in the game till he needed none.

Manoeuvring perfectly in fashion with grace and confidence, in that A.L.T. As every black man should. Starting in Segregated North Carolina at the age of 12 Picked up his first issue of the bi-weekly Vogue magazine and absorbed all it had to offer, with an amazing attention to detail he was introduced to none other than Mademoiselle Vreeland while she was at W as she was losing her sight A.L.T. Was her hand & worked with, learned much and a mentee of the Vreeland Manifesto those six weeks, which gifted him a job at interview Magazine.

You can certainly say this man is truly about his business, he knows what he means and means well. He has made it possible for many who want to be like him to be so full of life and rich in the scene, as a black man and Icon his stripes are well earned.

Sharing spaces with the likes of Andy Warhol his eye for fashion led him onwards and upwards, a true man in the mix he spent a great deal having a blast at Studio 54 his eye for style drew in many of the artistic royalty we know today. I can only imagine how magnetic his allure was.

As someone who volunteered at W, worked at Interview & Vogue the doors he is able to open his word will one far. Well respected his allure draws in names such as Bianca Jagger of Kanye West & Gloria Von Thurn und Taxis by his account. Giving you an idea of his aire of influence and the respect he holds within the culture and fashion community.

All star champion and mentor, to Isabella blow & confidant to Anna Wintour (who’s approval is obviously sought after) may have done it all and a bit more. Adored by Yves Saint Laurent, & Diana Ross, Naomi Campbell, Oprah.

Although he is all of these things he deems himself insecure ‘I’m insecure to this very day’ notion to a softer side of his character, a well rounded man raised by his grandmother & great-grandmother he stays humble man who gives all grace to God and always learning from those humble beginnings embellished on his memories has also said though, ‘my confidence is armour & grace… my armour is my knowledge’ quoting Judge Judy ‘they keep me here for my knowledge’ must. Solidifying his place standing next to any designer or fashion writer in any room in the world. The mantra of working twice as hard is lost on him but it’s clear to see he holds 5 times more knowledge than the average Joe keeping his wits about him.

You can hear by him he talks much of how close he is to religion & how it holds him down. It probably was the key for Sunday’s meant everything ‘you wore your best clothes… starch was heated on the stove… shirts were like cardboard’ his grandmother even would attend a segregated hat store and suffer but it was what was needed because style was just so important to all of the people (grandmothers aunties & uncles) around him. The way he emotes introspectively tells the story of a man who knows who he is because he was allowed to be by those closest to him and if he could be himself at home he is himself everywhere in the world

We need not go on. A man from the people bred by the culture full of electricity who lives fabulously and with every bit of lustre a black man should. Well aware he is standing on the shoulders of his ancestors. This man oozes Divinity.

Whatever Moves Your Dial,