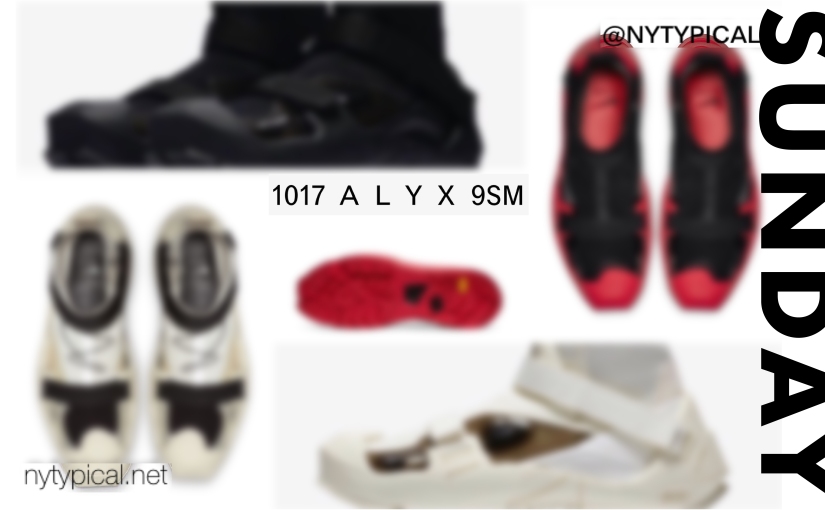 Matthew williams edges mays best sneaker with the free run images just days before the month ends. It was probably going to go to a free run anyway but this is a speedsock free run with rugged detachable sole that doubles as a basketball sneaker. I am yet to see how weatherproof this rugged second sole is so we can’t call it Techwear but it’s my favourite thing to look at right now.

Matthew Williams pulled something off I don’t think anyone has wrote about. He made Nike and another name brand collab all on his own, we should all know Nike puts out exclusivity contracts for anyone working with them meaning they can’t work with a competing brand but maybe Matthew has found a way to get Alyx to work with Nike.

I have a Vibram blog coming up but they have been getting busy with other industrial sneaker designers and Matthew is one of their main ambassadors with pretty much all his sneakers donning a Vibram second sole. This second sole is rugged chunky and looks almost weatherproof but I like to call these Second Soles City Clip-ons meaning they’re built for inner city walking only and don’t be so certain water won’t fall in the cracks of the innersole of the second sole. Kind of confusing but you get the picture.

The running sneaker or speed sock does not have the Frampton Ellis Barefoot Tech probably to make it easier to clip on to the sole but it is a high top that is slip on with an inner sole zip and shoelaces as a facade or to tighten. Some rugged toe grip and same reinforcement on the heel – and if I know anything about the way the free run is designed that sole is very flat and sticky probably enough for court use.

The detailing on this crep is impressive I love it, just looks sleek and calm to wear on its own with such a simple silhouette as the freeRUN one, it’s Details make it look very technical and methodical all the fabrics and plastics used seem to be for a purpose and and to the fine details and texture of the boot. Which is really reinforced when you add the Vibram sole which I really want a close look at the mould’s details To see what it really does. The mould really adds to the silhouette a different energy you almost look at the boot as an all in one till you take it off and see the speedsock on it’s own

At this point Vibram is really pulling it in the eyes of Techwear crep aficionados like myself thanks to Matthew it is looking nice to me, Nike made a good move not being too precious with the new sneaker silhouettes and allowing the artist to really manipulate them to create a whole different unique style.

This Crep really speaks to Matthews philosophy and to the industrial sneaker trend now style that sleek & simple go with rugged and detailed.

At this point I really just want to jump in and add to this industrial Sneaker style put my name in the hat and make it certified I’ve really got some things cooking but all in due time. I just love what my peers are doing and moving in a direction I like.