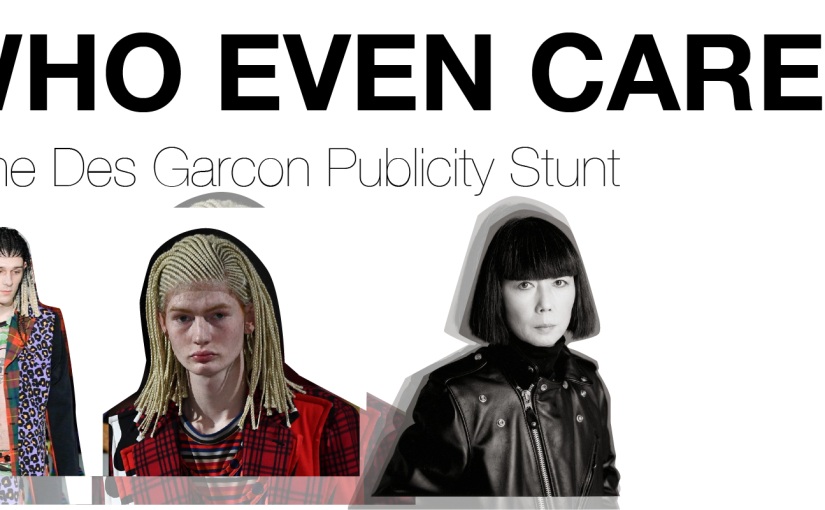 If we are going to have a serious conversation about. Fashion designers aren’t the most “woke” people in the world. Considering as there are only maybe 3 places that are considered a melting pot (LA New York & London) it would be hard to say that designers from all over the world have a good idea of what other cultures do and know how to represent each one in the right way.

Recently Comme Des Garçon (CDG)has a fashion show where models wore cornrow wigs. Sadly these wigs were not laid the edges were not snatched and the laces were all types of exposed. The hair stylist said something about Egypt and Tutankhamen blasé blasé blah, the show Note really didn’t have anything to say about it. Not to mention the designs were not exceptional as CDG has been on a decline since their Play line dropped. That isn’t what this article is about.

Diversity and representation was bought to my attention and I have been thinking about it, what is there to say about the fashion industry. It’s not been the most woke space or the most accepting of black people let alone any other race. The idea of beauty is European as shown by the types of models being picked and how make-up has been used. Naomi Campbells makeup back in the day was terrible and there have been so many horror stories of women who have had to do their own makeup at shoots and create the own hairstyles/ been left as they are because stylists nary have the range for any of it.

When working on darker skin different materials need to be used but up until recently where more research and an uproar of women have forced the beauty industry to invest in better makeup and options for darker skin.

This is the thing I’ve got, I’ve never expected any more from people who only have only dealt with certain shades of people, in the case of CDG I don’t see Rei (Creative Director) Rei Kawakubo Being this shining emblem of understanding black culture let alone how to work with black hair styles. Of course she can hire people to do that but where would they be.

The thing is it’s all well and good having black people on the runway but when we speak on being behind the scenes as stylists – so you know what colours won’t was out the skin; photographers – who know what lighting is flattering; casting directors – so they have an understanding of black beauty not as a token or fetish but a genuine interest; Make Up artists – who work with black skin and have the range of toolset a job well done; and hair stylists – who know how to treat black hair to not break it or destroy it.

They would rarely be in the rooms because how do you contact them and are you even willing to pay that fee and do they consider it worth it. I can’t say everyone not in a so called melting pot is racist but they’re less likely to even know how to interact with black people as humans considering all they know of the culture is either us being killed or getting killed, from movies, TV shows, and the news more importantly – the reality.

The plain reality is it’s less likely for anyone who has never seen black people as a natural complex individuals won’t have the time to do it in their older age. Times like this people show their true colours (pun intended) lack of desire and biases as it pertains to people of colour in general.

I don’t necessarily get up in arms about it because this is just another anecdote of how representation matters and the best method is to use the people your emulating to show you how to do it properly. Also use the right people because not every black person is fond of black people or cares about how we’re demonstrated in the media nor care about black women or know any of their struggles as it pertains to the beauty industry.

This is the best way I can address the situation as the answer is simple and worth it but do these creators care enough to use it. We will find out more later this decade.

Stay composed and keep your neck up