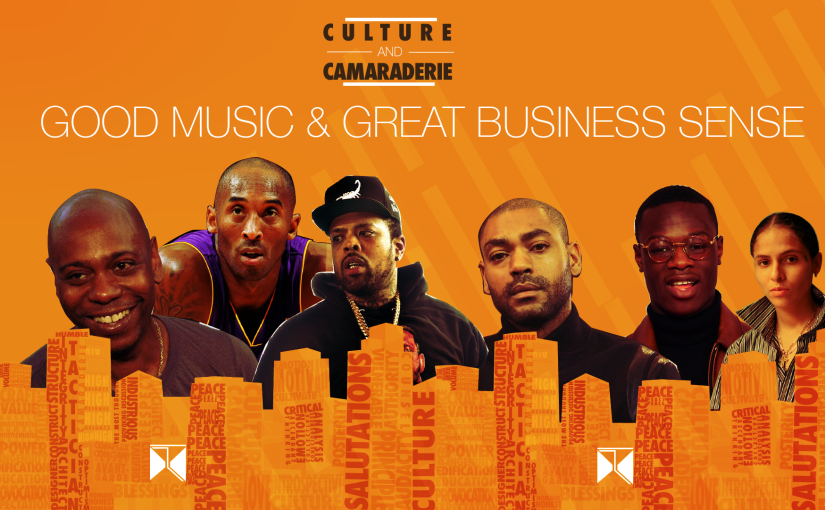 This is the coming of the newest instalment of the Culture and Camaraderie podcast with  myself ARAH of @NYTypical & Tyler @Lax_Era.. On this weeks most thought provoking introspective industrious creative discussion:
We introduced visuals on Youtube at Culture And Camaraderie. Then we get into All the albums as well as a continuation of our Kano conversation as the documentary for ‘Hoodies all Summer” Dropped… J Hus New Album and 070 Shake as well as a deep discussion about good music.
Following we speak about efforts we put into make our work greater leading us to talk about Dave Chappell Winning his Mark Twain Award. The Way Dave gave all his aura up and shared it with friends is part of the new culture being formed round entertainers in business, Following that discussion we Speak on Westside Gunn and Griseldas influence on Rap today. How influential drug dealers are in our culture

ALL THE MUSIC FROM THE CULTURE

We From the Coast to the Local we speak about new music of J Hus and 070 Shake. but the controversy continues as people say UK music is is lesser and J Has new album is trash making us have a discussion about GOOD music and I believe its not subjective there is good  and Classic is consensus

Not all ideas are qualified, there’s not a thing people say where we can believe their ideas depending on who they are, the people in question who happen to be artist it don’t do as well as j Hus put many in a predicament when talking about their music vs  Hus’ now should we scrutinise artists in growth spaces? the conversation ensues

Pick an episode and enjoy from our DSPs

Tune in// Culture and Camaraderie Podcast

ALL THE EFFORTS IN BUSINESS

we speak on the mentality of greatness that happens to be in play when speaking on the quality of resources you work with & the quality of effort you put out. Continuing on Objectivity in entertainment. Maybe sometimes the people are right you may be terrible but a criticism isn’t an attack its an opinion.

Putting The effort in to all the work consciously working with better resources till you’re considered the best is the only path, Dave Chappelle got to that level and uplifted all his friends during his acceptance speech. That shows the quality of character at play not many display. That is continued when Westside Gunn speaks on building Griselda with his Family. Sticking to their guns and doing what they do best, so much to be learned from

We get into all that and more on the long podcast.

Whatever Moves your Dial

Check out my other Podcasts