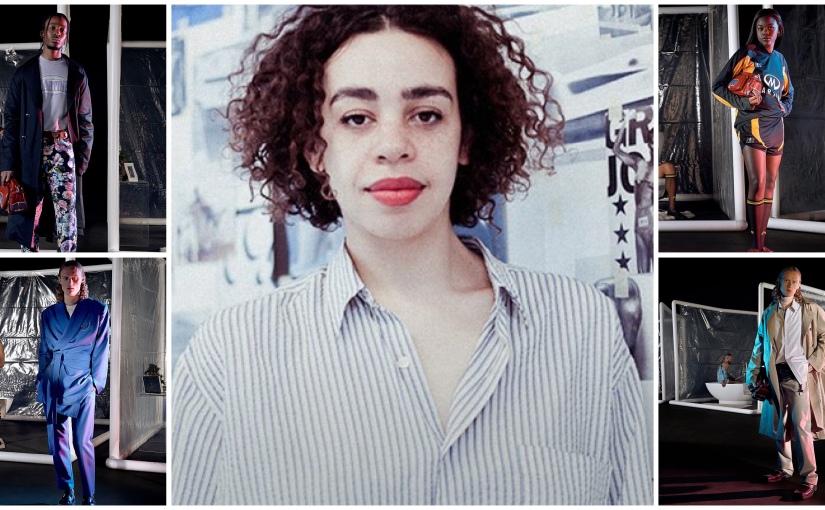 Bless Up from your feet to your head top

This British Designer called Martine rose is the first of my 3 Rookies who have been blazing a path for themselves for years now and don’t have the recognition in the certain circles I live in. Not only that she is part of a group of designers that I believe can last this decade also.

First Martine Rose is a unisex designer, yes unisex designer. She designs for both men and women, she herself said in her early years her womenswear was very much women in men’s clothes, then she said to switch to call it menswear fully. Why do I call it unisex well because that is what my honest perception is, as I see it, its well understood that women will wear men’s garments but men, or at least the men she appeals to/ influenced by won’t wear a women collection.

Outside of my personal thoughts, Martine Rose makes designs in the image of the man who lived in the 80’s, as the story is romantically told she was enamoured by her cousins that were into all different lifestyles and subcultures would turn her fascination into a passion by putting her on and immersing her into the culture. She also references the Clapham Commons where all the people of different walks of life would congregate, trade and interact. She first exposed this love in 2007 helping her gain the love of Lulu Kennedy of Fashion East giving her that boost she needed. All the while still broke all the while still with the support of her cousins all the while working at a bar he toiled and toiled away at her design ethos.

Much like Grace Wales Bonner Martine Rose indulges in the lusty fantasy of what men she loves the most. the difference being there’s a buyer base for what Martine does. The man her clothes are informed by were those in the 80’s outside of the struggle and strife (not saying she can’t get political) but she works with the freeze-frame of the mash-up of the cultures and doesn’t stray further from the picturesque image of what a man of that time is to her.

The Men Martine appeals to love it, she is a truly thoughtful designer of the people she dresses and has studied meticulously the form of men and understands masculinity as it is and not as she wishes it to be. Her Aesthetic includes Boxy fits – these are strong shoulders with pulled proportions depending on her feeling of the fabric or the look; Oversized constructs – her fabrics aren’t necessarily flowy like most oversized she either mixes in the boxy tailoring or has the form carry the person’s physique; Romantic revision of masculine constructivism – she gives you colour and patterns pushing the bounds of masculinity with it but never straying too far in her take on colour or pattern in order to keep the structure of Masculinity, also what she loves to do is mix patterns in assertively and create harmony, a considerate harmony of positioning.

Martine Rose Style has influenced Demna, post her introduction of boxy oversized to the scene that Vetements and Demna would get the credit for later, she was then given the olive branch to consult with Balenciaga on menswear. Demna also flirts with her Football aesthetic, using her references as muse as an ongoing theme in both houses he ran from Vetements to Balenciaga. He truly takes from her inspiration and her consultation into consideration when making a collection and it’s so clear to see.

During her whole career, Martine Rose has how resilience in the face of overwhelming odds Courage when the doubters would come about and say her designs were nothing more than high priced thrift items. Confidence to stick to her guns and assure herself that what she was doing was the right thing although the road less traveled and conviction on the hard-wrought path the one that would yield greatly once it clicked.

This level of self belief has got her deals with Nike on what is looking like a reoccurring collection, Napapijri, THe Tribe, Timberland Catapillar and Been trill. With a resume like that and a story as fun as this one you can see why shes in the spring of the rookie, I feel right now shes sewing the seeds to be known as a great designer that we know in our time. After this recognition just now its great to have her to be in the running as a Great British Designer.

If you want to donate to help out this growing platform all patronage is welcome https://www.paypal.me/DYusuff