I first encountered Kiko after his SS18 collection but in 2019 I wasn’t sure if I was late or early to the party but I was sure he was doing the right thing. This relative unknown then became the dark horse in the race to evolve menswear.

Kiko and his ASICS collab have had him in the sights of many men in fashion wanting more from him and wanting well of him, he seems to provoke in men what Chanel was said to have provoked in women back in her day. We see Kiko garner the attention of men all over wanting the uniform of ‘a man’, this really interests me as I have been working on my menswear thesis for quite some time Kiko seems to design in alignment to some of my brief. And as a relatively new and fairly obscure designer it seems he has a formula to bring more men into fashion.

This is why he is part of the Spring of the Rookie, I pick my rookies due to years in the game, Kiko Debut in 2017 and if you aren’t looking for him you may not find him but much like Sam Ross I feel his vigour and his energy is oxygen to the flame of the new Menswear ethos. Reason being you see Kiko here, I enjoy being on the right side of history and this man is my second gamble he may become a pillar of the community or a slab that lay the foundation this is my lot to say the former. I see him as someone that can grow into potentially one of the top designers of our generation given time and guidance

Kiko began his journey in Belgium of all places moving to the U.K. as a teen and going to Central Saint Martins. Already his story is quite interesting as an immigrant coming to London to study fashion is nary a thing you hear of, the creative arts is something that’s feared by immigrant families because its nature is due to a gamble not everyone is here to make it. My guess is Kiko bet on himself enough to get the funds to educate himself in fashion, as hard as it may be he done it as a man. I rarely hear stories of people coming to the U.K. to make it in Creative industries let alone business these stories are usually reserved for America. I believe this start is what draws certain men to Kiko that understanding of someone who decided to go for his dream and achieve it in a land he didn’t know. Whether he will stay here due to the U.K. laws on art and entrepreneurship, that’s a conversation for a different day. Kiko is here and men love him right now.

As a designer Kiko Kostadinov focuses highly on tailoring using his eye for utility his garments are very structured and he seems to challenge himself pushing the way he references and the kind of garments he constructs. The type of shapes and patterns he uses as details remind me of 70’s Abstract Modernism work, found in his beloved Belgium maybe Thomas Kapsalis morso Karel Maes if I do say so myself the shapes and colours certainly do seem inspired in that direction and that to me has me tip my hat of to him as someone drawing from his home and creating work that is representative of all things that are him.

Functionally his clothes seem to focus heavily on masculine aesthetic shows me so much about himself, his ethos certainly shows itself through his clothes and it is fair to say he enjoys his work. He seems to consider so much from his references in art to the designers and film. He doesn’t romanticise men but sees them how they are and enjoys being one, if that is an honest turn of phrase. So when we say he’s utilitarian it’s to mean he makes what is of use and when we say abstract modernist it’s to say he creates a design language recognisable to him without compromising the garment the wearer or himself.

I have to note he covers himself in controversy being so soon out as he is prone to profane outbursts calling out designers like Virgil Abloh for instance, turning his nose up at designers who may not be like him, you would think as an artist he would be more considerate of others feelings, yet he’s not. He leaves room for him to be memed as a tyrant that feels more prestige because of his pedigree having been to CSM and worked for certain labels. As an artist that talks about other artists as well I refrain from sending harsh or profane language someone’s way and if I critique its to be constructive because I want there to be a better intention for great work. I do see he is a whole person as an artist you buy into him and if you are cool with him you can be cool with his clothes. Maybe he comes from a space of love for the craft but I don’t see it as a valuable use of time talking about other designers this way as you are trying to come out of relative obscurity, not that I think it hurt or helps but that’s how I see it.

He shares a space with no one and may be here to define a new way or new lane for designers as a whole and create a language for men at mass, we are looking forward to something new as he has laid a foundation with these firsts collections, his work seems to have some sort of factory setting so it would be fun to see something different pushing his boundaries but there is something to be said for someone who is consistently showing greatness within the bounds they laid for themselves.

This is my Rookie Kiko

If you want to donate to help out this growing platform all patronage is welcome https://www.paypal.me/DYusuff

Spring of The Rookie,

I won’t lie to you I’m so enamoured by the business acumen JW Anderson portrays it’s everything I exude.

It shows me everything I want to do is possible to achieve with still being creative, there’s really no one that can tell me anything at this point to where I have several case studies including Virgil Abloh, Samuel Ross and Yoon who all are exemplars of my ethos.

With the signage all over the creps, it’s a light flex to those who are in the know and understand what it is, yes it’s Converse but it’s so much more now with the JWA cross pattern.

Reminding me of Dorothy on the Yellow brick road this pair are as quirky and Gaye as it gets, just so happy and joyful dancing shoes for the lord of the dance

The pair of the season kind of bringing it full circle having a solid look that means something with the pumps giving it the extra lift I’m finding the dad shoe effect comfortably done on the Converse I wonder if it’s just as comfortable as one.

Hombre hours blended colours on vinyl? IMAGINE, super creative and quite honest, it’s all about telling the story with this collection. I’ve spoken a lot about telling a story with a pair of trainers and not just having them look good but be memorable enough to be desirable long term and I feel these do that sufficiently, Jonathan seems to have been given room since to make the Hike Collection because of this. And that’s what I’m talking about

The collection of converse trainer and British brand seems like a good pairing so far and I visibly see the demographic he is targeting with each pair, the designers that flourish are the ones with a customer in mind and that’s what’s happening here, salut

For The Collection of Spring Of The Rookie

Spring of The Rookie… We Go Again

In spring of the rookie I explore all the fashion designers whose aesthetic were forced into my periphery by way of osmosis.

Just as I stumble on new music is the same way new designers make it into my lense, creating intrigue to me usually with their first season.

JW Anderson was a different story, i first found out about him through his marketing campaigns with fashion websites and influencers, the signature turtleneck with the big O as an example for this year where he was really in center stage with the Stylist on Instagram from Korea to North America I was amazed to see the amount of people wearing what he has to offer with all the knitwear and woollens he provided.

I was put onto JW Anderson as one to watch in 2016 and you hear a couple things here and there and in 2017 when I thought up my first collection was when it made sense why he was one to watch for menswear. 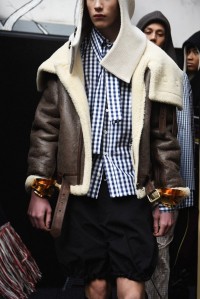 What he does with form and silhouettes with the contemporary style luxuriant comfort big bulky and well made come to mind when describing this recent season I have seen.

Takin a look back to pre 2054 I really understood the draw by the industry because there is this hint of fusion or melding of men’s and womenswear, I saw the trend around that time and took no lead from it but to see what it inspired before menswear became more black culture orientated it was kind of a “pioneering” step for contemporary. Not saying people haven’t tried before it’s just that this is the time it worked

Then we go to the business side I spoke about the marketing and e-commerce and merchandising of the garments, come to find out Jonathan has a CEO. Now this is a major major thing to me because I see creatives as a business idea, which needs a CEO to run the business and Creative to run the Ethos just like in Silicon Valley.

Jonathan is done what I see as the future in real time which happened when it was just a spark of an idea back when I was still figuring everything out in University. Something so American coming from a British Designer making sure he’s successful as a business and a designer.

What an amazing tale of ingenuity and creative flare. Not just clothes but an infrastructure, it’s a fools tale to call him a rookie but compared to where I see him heading considering he’s been thinking so forward from early, I would not call it a stretch to say JW Anderson will become an institution

For The Collection of Spring Of The Rookie