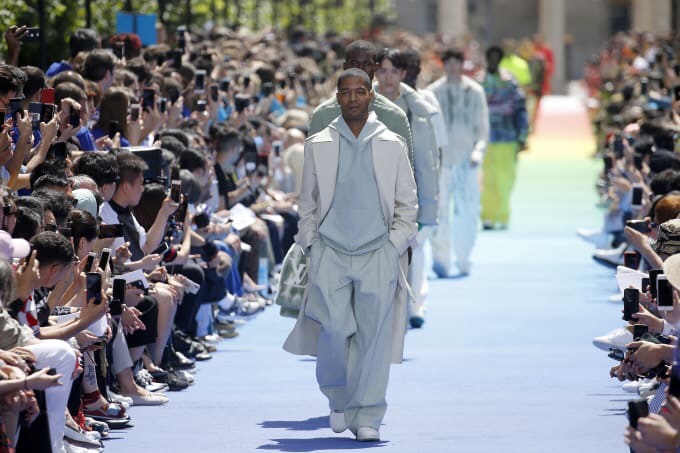 This is a special one to me for many reasons. Seeing a black person at the head of a French luxury fashion house. First of his kind; pure hip hop; from that era where being fly was everything and unattainable.

What is it though when you’re casual wear becomes luxury? We’ll come back to that later. Let’s set the stage, you walk into the rainbow lit trail the whole place is colour coordinated immaculately. As you would expect from LV.

As the show starts the models unsheathe in white and as the colours progress the tone starts to change. Which is so brilliant, you can tell it was as very Yeezy-esque touch as that has been part of the treatment for many years now, something Kanye & Virgil developed together perhaps? We just see the colours were brilliantly done as you would expect from Louis Vuitton. Kanye starts playing and the colours of the show are pushed and pushed more, very relaxed very cozy very much what has been developing in the underground scene for many years now all the way and all the way chiqué. Not something we will be doing that well into 2019 but it is increasingly the influence of the show. An homage to the past all the way to the present styles of today. The body bags, the trousers the Jackets even though it’s Spring Summer. The whole thing was cognisant of the world market and the way people would dress in Eastern Europe LA Texas Paris Russia and London, the collective styles really show through in this collection. Reigning true to what Virgil said as it is an Homage to what’s come before. Truly representative of the Culture At Large.To the clothes

there’s nothing like the master tailoring and referencing, not in irony but in the promotion of the culture in its best interest. In this you can see so many parts and pieces of different culture from club to skate to scene to ball. Being familiar with all of them is so important as to catch the references. Some are pretty obvious, all in its an ode to men and how this new man who lacks suits but still has style likes to dress without colour an empty canvas to fill in with your needs.

the show progressed bursting colour onto the scene flowing through time but a reference to childhood ‘the ugly sweater‘ motif beautifully made. Like Raf would have it.

incorporating bags into this way is of the time like Samuel of ACW would have it is addressing the needs of the modern man aesthetic, men’s fashion holds a utility quality to it, clothes that fixes the needs of the man are what he choses to wear at the time. Body bags, chest rigs and fanny packed are all part of youth culture today and this right here brings luxury to the street.

Speaking of the street and the culture of the diaspora it really intrigued me seeing the pullover on such a luxury runway like a Louis Vuitton.

Having a staple of Street culture that had a people looking like a threat for the 2000’s and prior now be a luxury fashion piece and suit with the motif. Did Virgil successfully make the “Hoodie” high fashion and was this one of those ‘haha moments’ he would talk about when it comes to ‘sneaking us in‘.